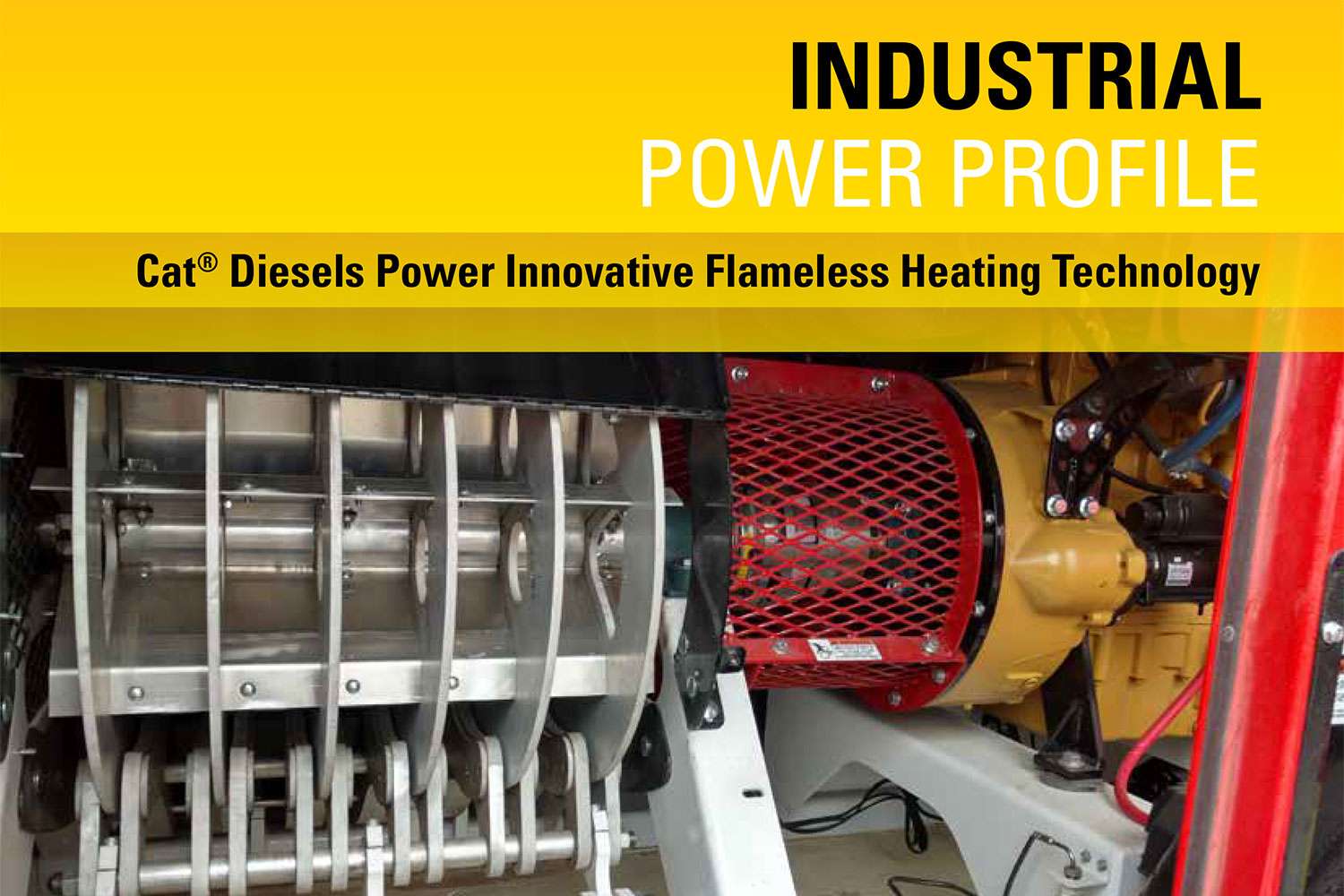 Supplying large volumes of clean heated air in situations where an open flame cannot be allowed presents a number of unusual challenges. The fact that those situations often occur in very cold locations like North Dakota’s oil fields or remote arctic exploration and production facilities only compounds the difficulty. Nevertheless, a combination of efficient, reliable Cat® diesel power and an innovative application of magnetic technology has allowed Precision Equipment Manufacturing of Fargo, North Dakota, to meet the challenge with its line of MagFan™ flameless heaters.

“It has long been known that moving a conductor through a magnetic field will induce an electric current in the conductor”, explained Precision Equipment president, Joel Jorgenson. “That’s the basic principle behind every motorized generator in use today.”

“But, what happens if the conductor is not part of a circuit that allows the induced current to flow? Well, the answer is that the energy induced in the conductor is converted to heat and that becomes very interesting when you need heat but can’t have a flame.”

A MagFan™ flameless heater consists of a high-efficiency, multi-section axial-flow fan and a number of aluminum arms all spinning on the same shaft. Each of the spinning arms passes between a pair of powerful rare-earth magnets mounted on separate movable arms attached to the chassis.

As the spinning arms pass through the magnetic field the induced current is converted to heat that is then transferred to the airstream flowing through the fan. The amount of heat generated can be controlled precisely by varying the speed of the rotating assembly, and the distance between the magnets.

“It’s a really elegant way to generate heat and lots of it,” Jorgenson said. “Air entering the fan after passing over the heated aluminum arms will be at 300 to 400° F. and 200 to 300° F when it exits after mixing with colder outside air. We can maintain those temperatures precisely and produce anywhere from 4,000 to 8,000 cubic feet per minute all day for weeks at a time if necessary.”

“The early MagFan units were powered by a competitive diesel,” said Ziegler Cat Senior Sales Engineer Steve Campen. “While they were adequate to rotate the fan, they proved to be less than optimum choices in other areas important to Precision.”

“They approached us for a solution, and we ended up shipping an engine to them the next day. That first installation was so successful that they have now standardized on Cat power for the whole line of MagFan flameless heaters.”
“Generating heat without a flame was only part of the challenge”, Jorgenson said. “We also needed the ability to monitor and control units operating in remote areas with a comprehensive telemetry system that supported real-time diagnostics and supplied data for both preventive and predictive maintenance activities.”

“That is a tall order, but the Cat Electronic Control Units (ECUs) communicate perfectly with the telemetry software we developed to provide a seamless solution. Right now we have MagFan heaters running in locations as diverse as Ohio, Wyoming, Oklahoma and Prudhoe Bay, Alaska, all of which are being monitored in real-time via the internet from our facility here in Fargo.”

“Because we know exactly how each engine is performing we can do things like email a customer to arrange for a fuel delivery within a very narrow time window, or tell them to check specific things at the next oil change. We can also do predictive maintenance and even send out a kit to fix a problem that has not actually happened yet. Needless to say, that is an extremely valuable service to a customer in a cold, remote location who is depending on the MagFan for warmth.”

All of the Cat engines Precision uses have the same control technology so the telemetry capabilities scale across the entire MagFan product line. The controls are so capable that Precision can regulate engine speed to ± 1 RPM on a unit running thousands of miles away.

Based on their success in the oil and construction industries, Precision is actively pursuing other applications for the MagFan flameless heating technology. Flood remediation, for example, requires high volumes of hot, dry air and is very sensitive to any potentially toxic carbon monoxide contamination. The MagFan is an ideal solution.

Even applications like exterminating bed bugs or other insect infestations by heating the ambient air in a hotel, hospital, or other building are well within the capabilities of a MagFan flameless heater. Given the ability of such insect pests to develop resistance to chemical pesticides, thermal decontamination may well be the wave of the future.

Regardless of the application, MagFan remains a dedicated Cat engine customer. They are, in the words of Jorgenson, “The perfect workhorse.”